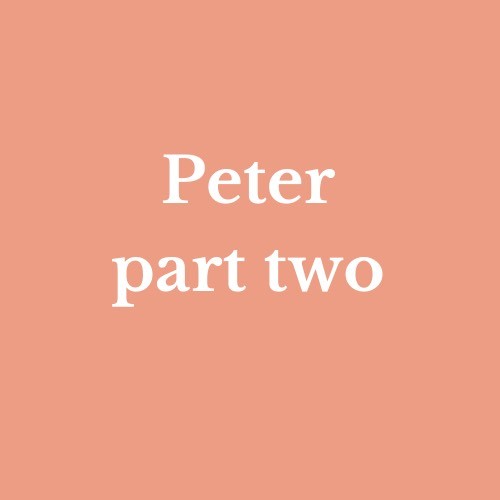 Who Was the Apostle Peter? A Deeper Look at One of the Twelve.

One of the major themes of 1 Peter is suffering. Christians faced: slander, shame, and alienation. We often hear about how Nero burned Christians, using them as human torches. However, the theory that the Emperor Nero blamed the Christians for the great fire of Rome in 64 AD and Christians becoming human torches maybe be incorrect. Candia Moss, Professor of Theology in the Department of Theology and Religion at the university of Birmingham, specializes in the study of the New Testament martyrdom in early Christianity and purports that experts in this field assert that Christians were not a group until after 64 Ad. They were Jews. Therefore, Nero could not have torched a group that did not yet exist.

During that era, one way to get honor was to shame others. It was an accepted standard that if you shamed someone, that would bring you honor. Slander, alienation, persecution, shaming others to make yourself seem righteous, is definitely part of our culture today. It is wise to understand the difference between shame and guilt. Guilt is feeling sorry for something you did wrong, but shame is saying you are bad or awful. Shaming is a form of mental torture. You might be surprised to know that there was a mask of torture and the Medieval Church used torturous methods for those who deviated from Christian orthodoxy. Wow! Thank God the church no long imposes such horrendous methods. But let me ask you this question: Have you felt the pain of shame from others in your church? Pain is pain, no matter how inflicted or how great or little. Many women are still fighting to gain equal access and equal recognition for their talents and for their ideas not to be dismissed or cast aside!

Peter wrote to Christians, who lived in the northern part of Asia Minor, who were being persecuted for their faith in Jesus. Peter urges them to remember that Jesus also suffered for them, to trust God to take care of them, and to live holy lives. May we all possess great faith, living holy lives, in our time of suffering.

Peter starts his letter, as most Greco-Roman letters, by stating the author and the recipient of the letter.

“To God’s elect, strangers in the world…” May I make a point here. There is division within the body of Christ and this should never be. Some people assert it is by-election from God alone regarding salvation. Others believe they are saved by accepting the invitation to believe in Jesus as their Lord and Savior. And others claim these two theories are a representation of the Jews and the Gentiles. Ephesians 1:4 states, “For he chose us…” Ephesians 1:13 states, “And you also were included in Christ when you heard the word of truth, the gospel of your salvation.” We were all strangers but by the sovereignty of God, he has chosen some (Jews) and allowed some (Gentiles) to “bring all things in heaven and on earth together under one head, even Christ” (Ephesians 1:10). God is sovereign in His choosing and His allowing! If you believe in Election, fine, if you believe otherwise, fine, as long as you believe in Jesus as your Savior and stop promoting the division within the body of Christ!

Christians are always being pulled in two different directions: up with Christ and downward towards sinful life. Some will fall into sin thinking there is no hope when they are suffering. Example: the alcoholic who has repeatedly tried to overcome their addiction with the help of Jesus. When they do not succeed, they give in to the temptation, giving up all hope. However, they need to never give up for when they do, “Hope through the resurrection of Jesus…suffering grief in all kinds of trials” (1 Peter 3, 6), in the end, they shall overcome all things through Christ. Do you find yourself like Paul in Romans 7:15, doing what you do not want to do? I do! But we must keep our eye on the finish line looking forward because, “Jesus replied, “no one who puts a hand to the plow and looks back is fit for service in the kingdom of God.” Why? Because if you turn to look right or left, your plow will always veer off your desired course!

Thank God for my new birth! (verse 3-5). Do you rejoice every day for your new birth? Peter states the goals of this new birth; a living hope, an inheritance that never fades. The goal is eternity with Jesus (verse 9). It is the hope that is unseen and we are to keep our eye on the race to finish well. Do you have goals? Is it one of your goals to help save others by bring the message of salvation to the lost? Look for those opportunities and ask God to give you opportunities. I remember giving a lady a ride to her apartment after I saw her running to the bus with her bag of groceries only to watch the bus pull away. She was about 45-50 years old. She explained that she was living with her elderly mother after her divorce and after her house burned down to the ground. She had just picked up her prescription of sleeping pills and had decided to kill herself that day. She felt unloved, unwanted, and useless. Only a 10-minute car ride convinced her that God had plans for her life. She thanked me through her tears and she claimed our meeting was an intercession from the Lord and that I was an angel. I assured her it was an intercession from the Lord but that I was no angel, ask my husband! Don’t pass up opportunities, step out of the boat like Peter!

After establishing the good news, Peter recalls the past when the prophets searched to find out the time of salvation through Christ would come, “that was the grace that was to come to you” (verse 10), they realized they were “not serving themselves but you, with they spoke of the things that have now been told” (Verse 12). It’s not about us, it’s about helping to bring God’s grace to the lost!

Let us keep searching and learning, “Even the angels long to look into these things” (Verse 12).